Trumpeter George Vosburgh has enjoyed a long and multi-faceted international career as a soloist, orchestral musician, and teacher. He holds a Grammy for his recording of L’Histoire du Soldat with Chicago Pro Musica, and is a laureate of the ARD Music Competition in Munich. From 1992-2017, he held the Martha Brooks Robinson Principal Trumpet Chair in the Pittsburgh Symphony. He has been Assistant Professor of Trumpet at Carnegie Mellon University since 2016.

Vosburgh has appeared as a soloist with the Pittsburgh Symphony Orchestra, the Seattle Symphony, the Bavarian Radio Symphony, the Calgary Philharmonic, the Ravinia Festival Orchestra, and the Eastman Wind Ensemble. He has premiered works by André Previn, Rodion Shchedrin, Ralph Shapey, and Shulamit Ran. In solo and chamber music settings, he has collaborated with such artists as Pinchas Zukerman, Yefim Bronfman, and Chen Reiss.

In 2002, Vosburgh recorded concertos by Haydn, Hummel, Telemann, and Leopold Mozart with Gerard Schwarz and the Seattle Symphony for the disc Four Trumpet Concerti. Subsequent solo recordings have included Trumpeter’s Heritage, recorded with the Czech Philharmonic, and Trumpet Masterworks, with pianist Alaine Fink. He is also featured on recordings by the Pittsburgh Symphony Brass, a group he founded in 1994 which has enjoyed a rich variety of performing and recording activity. The American Record Guide praised the ensemble’s first CD, Bach: The Art of Fugue, as “Magnificent, an extended example of first rate playing, with beautiful tone qualities, impeccable intonation, and polished execution.” Vosburgh is a Platinum Record recipient for his work with the New Age music ensemble Mannheim Steamroller.

An experienced and committed educator, Vosburgh has given masterclasses at universities and conservatories across Europe, Asia, and the United States. Recent masterclass appearances include the Yale School of Music, the Eastman School of Music, the University of Michigan, U.C.L.A., and the Tanglewood Festival. He teaches private lessons, repertoire and pedagogy classes, and conducts the Wind Ensemble at Carnegie Mellon University. Recent work with the Carnegie Mellon Wind Ensemble includes recordings of works by Mozart and Strauss, as well as a CD of works by Leonardo Balada for the Naxos label. As a conductor, Vosburgh has appeared with the American Conservatory of Music Orchestra, the Duquesne University Orchestra, the Pittsburgh Youth Symphony, the Rolandsek Festival Orchestra, and the Gran Canaria Philharmonic.

George Vosburgh is a graduate of the University of Rochester's Eastman School of Music. He is a Bach Artist and plays a 1948 New York 67 C trumpet. 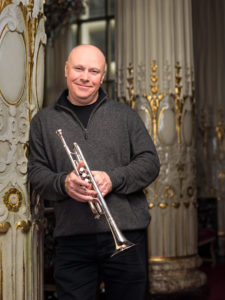